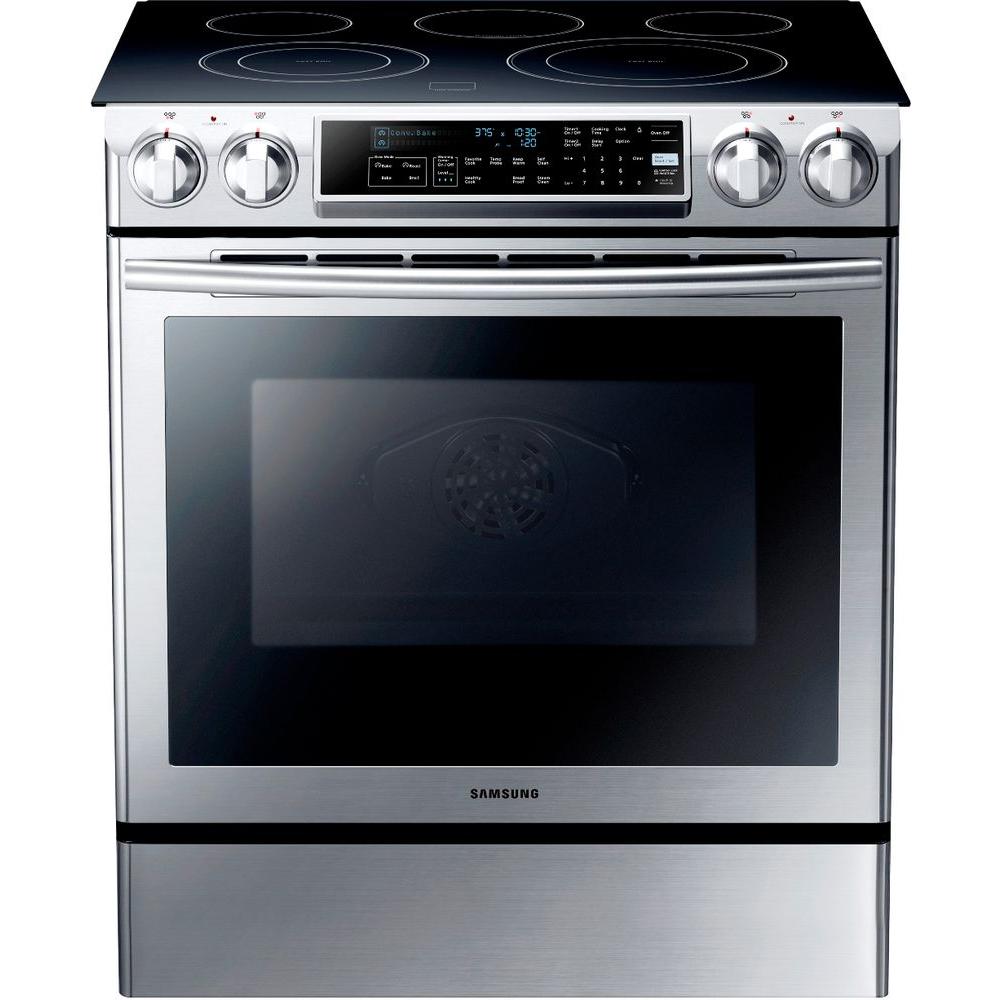 A modern design with advanced features, the Samsung NE58F9500SS 30’ slide-in electric model offers a generous 5.8 cu.ft oven, and a smooth 5 burner stove-top surface, that unfortunately has a tendency to scratch very easily according to many users. It has an intuitive digital control pad with guiding light controls to easily program cooking options, and helpful cooking presets to assist any amateur cooks who may need assistance in the kitchen. 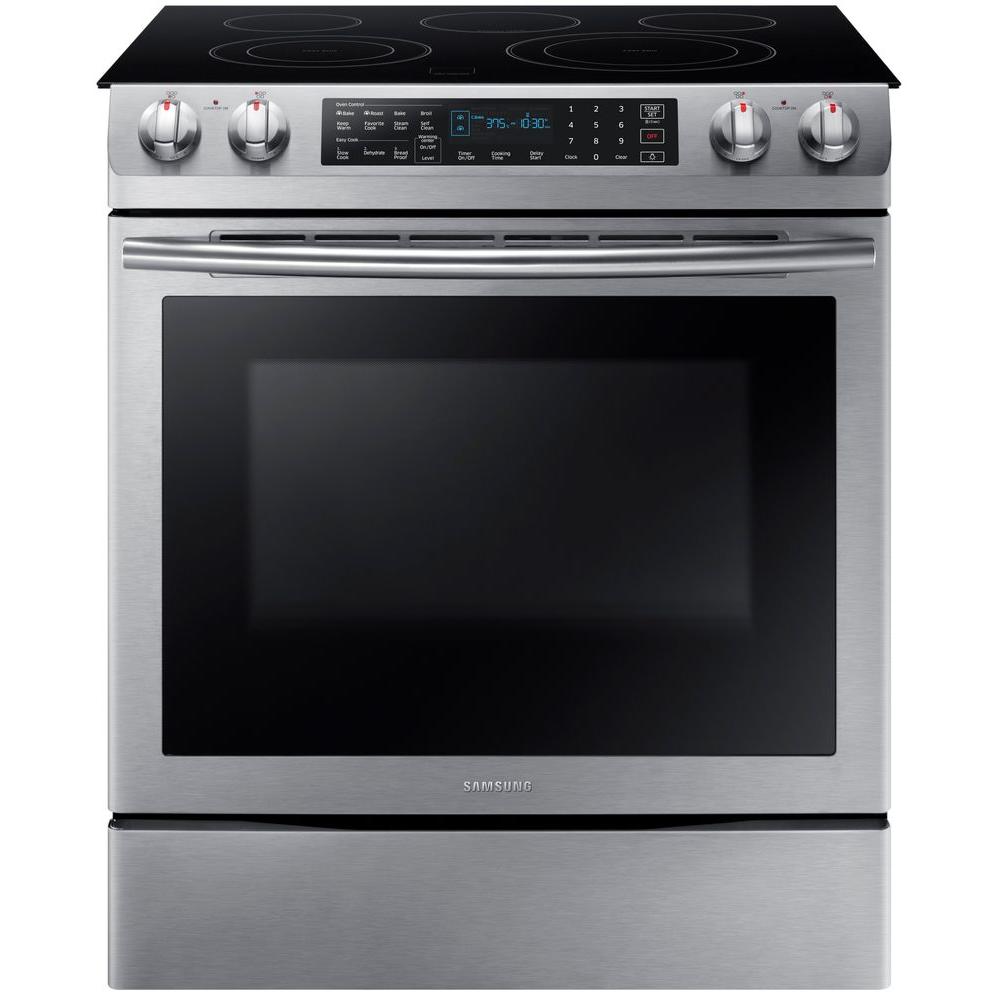 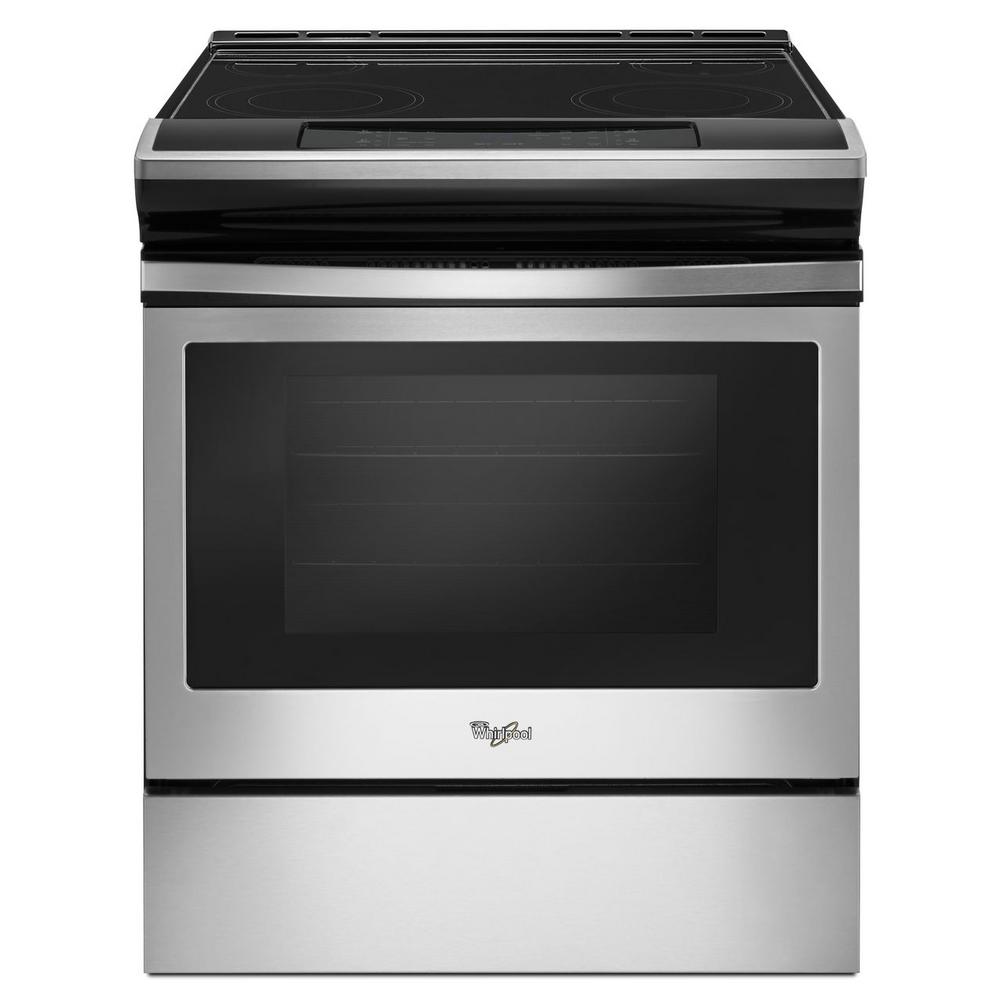 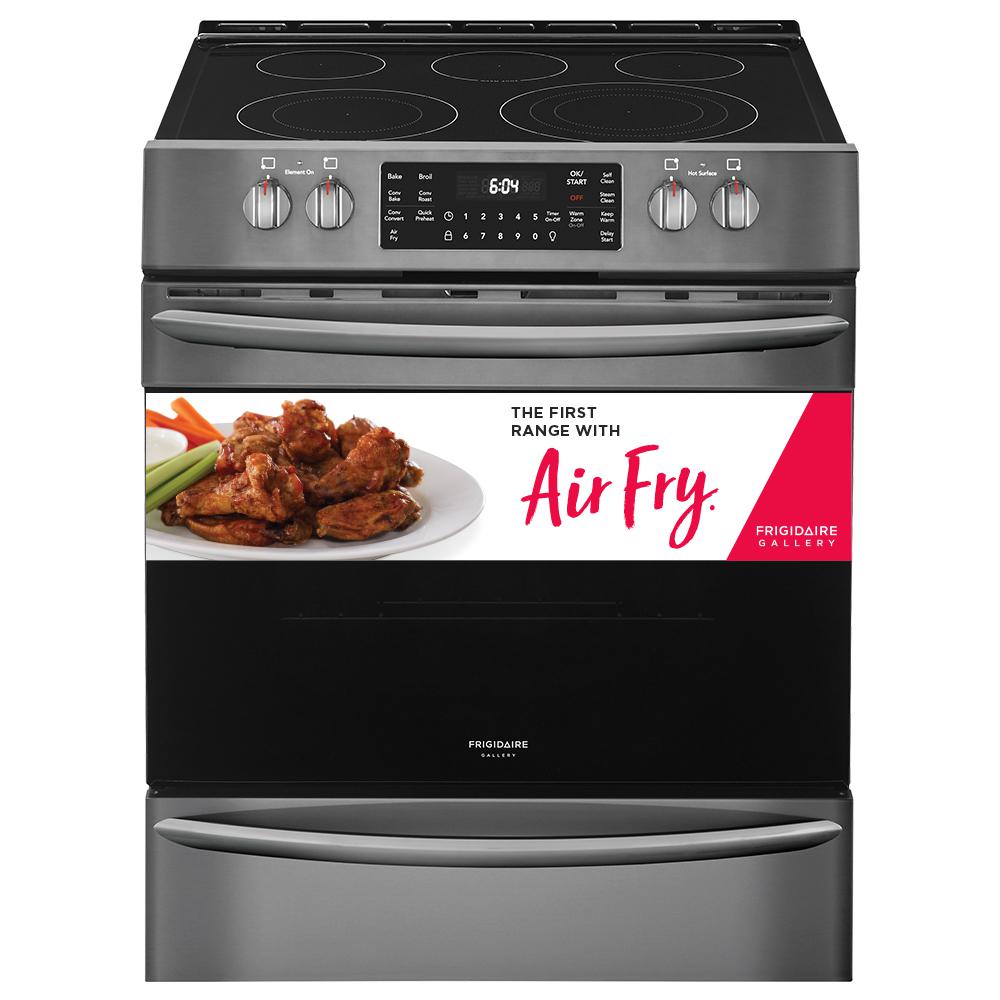 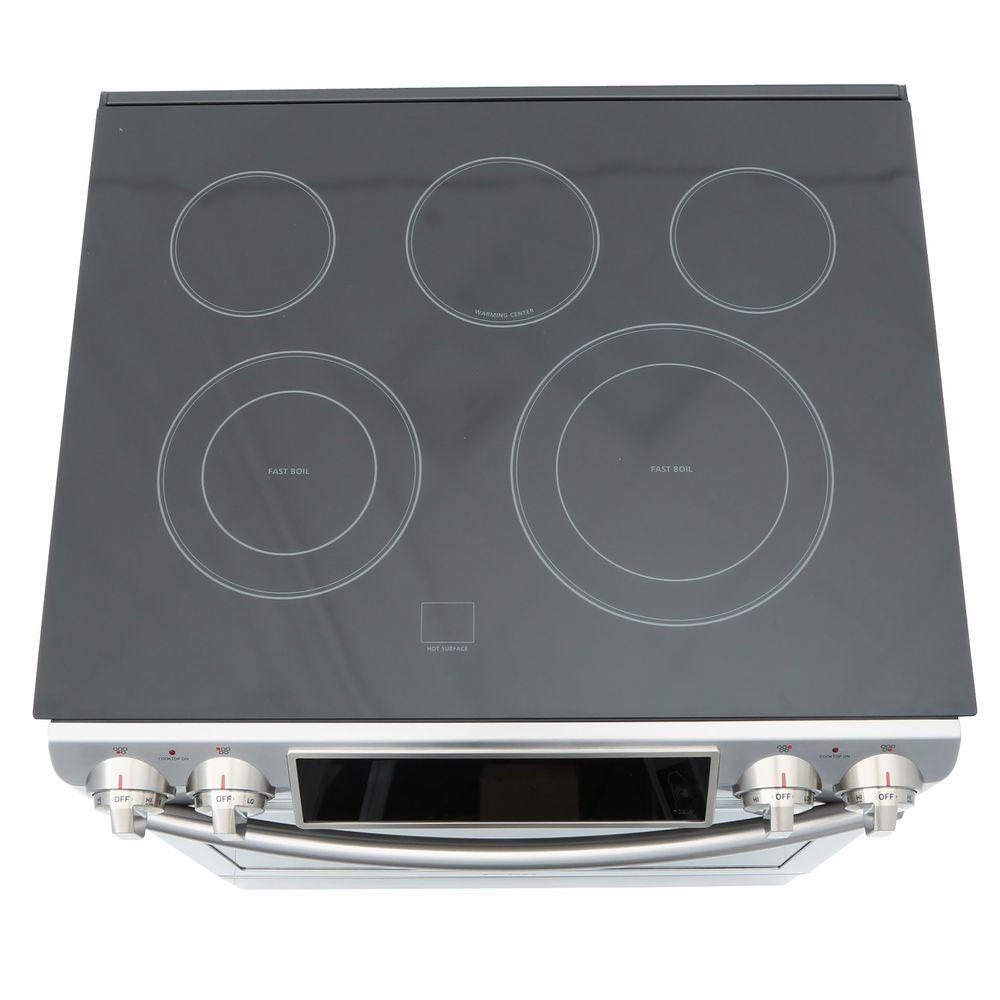 The Samsung NE58F9500SS stovetop consists of 5 burners; one triple, one dual, two singles and then a warming burner. Highest element output of 3000 watts on the front burners, with middle back warming burner emitting a steady 100 watts for gentle warming. Some users reported though, that their soup still boiled even on the lowest burner and settings, so the burners on this range are very powerful. The stovetop heats up nice and fast.

Users disliked the location of the most powerful burners, which are at the front of the stove. This location meant they had to lean over large hot pots cooking in the front, to get to the back less powerful burners.

The smooth glass cooktop is supposed to be easy to clean but there were numerous reports on how easily the cooktop scratches and retains marks and fingerprints. Cooktop would need to be delicately maintained and cleaned very carefully. 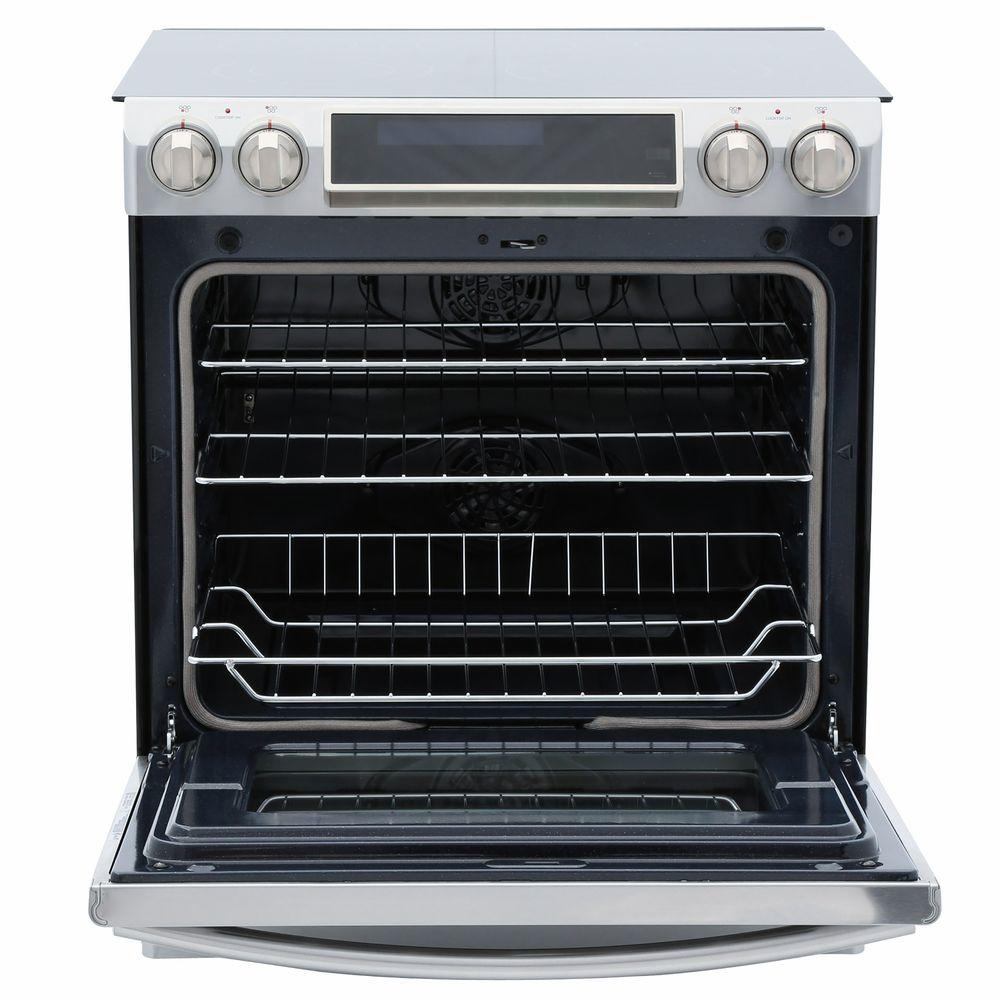 There are 3 oven racks that can be used in 7 different oven rack positions in the spacious 5.8 cu. ft oven controlled by intuitive digital touch controls – which includes a ‘delay-start’ mode and 5  ‘healthy cook’ presets for those who may be watching their weight.

This model has dual convection capabilities – so it offers not one, but two fans to evenly and efficiently circulate heat throughout the oven, thus saving up to 30% more time than traditional convection ovens. Some users disliked the fans though which reportedly ran even when the convection oven was not in use. Their main concern with this was the hot air being blown out the front vent into the kitchen and during summer this could make cooking a meal a sweaty and unpleasant experience. Lovely during winter though to keep the kitchen warm and toasty.

Many remarked on the ovens’ great functionality which baked evenly and roasted beautifully, and they enjoyed all the useful additional functions and features it had.

A wide-angle large window on the oven door and automatic oven light allow one to easily monitor the progress of whatever is cooking inside. 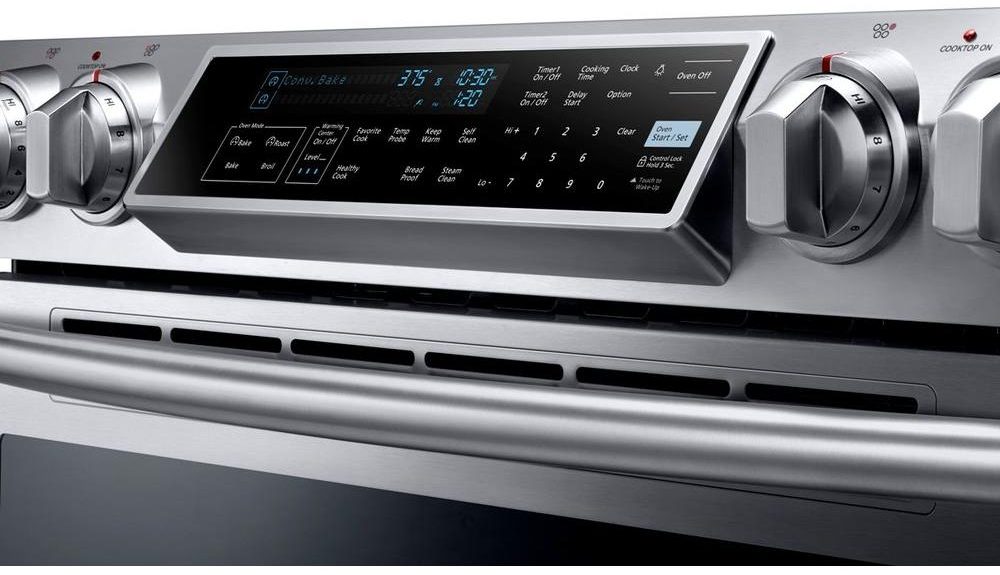 Dual convection capabilities with two fans circulating air throughout the oven for faster and more evenly distributed heat. This dual convection saves you up to 30% more time than your standard convection oven.

Intuitive controls guide you in simple and easy steps to choose the best cooking options, oven temperature and cooking times. It also helpfully remembers your favorite recipes and users really enjoyed how easy it was to cook with these helpful guides and controls.

No need to open the oven door and thereby release heat, rather monitor your roasts and other delicious meaty dishes with a built-in temperature probe.

There is a 0.7 cu.ft  bottom storage drawer to hold baking trays and racks and also elevate the oven capacity off from floor level for easier accessibility. There were some that suggested a dual-purpose storage drawer with added warming capabilities would have appreciated.

The Samsung NE58F9500SS has a self-cleaning oven as well as a quick 20-minute steam-clean cycle which users loved.

Users loved the sturdiness of the stove and the large stainless steel handle that easily opened the oven door, and many remarked how it looked like their stove was actually ‘built-in’ to their countertops. This could be because of the ‘lip’ on the side of the stovetop which joins the edges and sides of your stovetop to the edges of your countertops, and thankfully also prevents food spillage down the side of the cooktop and in between the cabinets.

Users also really liked the simple user interface with a bright display and solid knobs that control the stovetop – the touch control pad was reportedly very sensitive though and tended to light up even when gingerly wiping and cleaning it or even simply brushing past. The knobs were also reportedly a bit too easy to turn on by mistake and there is, unfortunately, no functionality to lock the knobs controlling the stovetop.

Another misnomer reported by some users was the black stainless color option of this model which reportedly had black skin that bubbled and peeled off in some instances, and one user even lamented that the pictures above the knobs rubbed off on her appliance. Once again, the stovetop and cleaning thereof would have to be done with care.

Ultimately, if you are looking for a fast-cooking stovetop and an appliance that looks like it was part of your original kitchen, and not added in later, then this is the stove for you.

Aesthetically – the stovetop may end up looking a bit scratched after only a few uses because it’s quite delicate, but if you don’t mind a bit of wear-and-tear, and you want a sleek, professional-looking appliance with loads of useful additional features for a decent price, then the Samsung NE58F9500SS will do you right. There are a few alternatives that you may also want to consider listed down below.

A smaller oven on this model at only 4.8 cu.ft, this knobless, electric, front control stove also comes with a smooth glass cooktop and 4 element burners.

Users liked this stylish appliance and many commented that it was user friendly with easy to understand controls. Some also remarked how easy it was to keep clean as there are zero knobs to clean or wipe around; although the smooth cooktop also had the potential to scratch easily, it seems most of the glass cooktops do.

It is missing a few of the features that the Samsung NE58F9500SS has, like;

Upgrade to the 30’ black stainless steel slide-in electric convection model on offer from Frigidaire which has a 5 element (also smooth) cooktop; one of which is a flexible triple expandable element with an inner ring of 6” for small pots and pans, and a  9” and 12” outer ring that can be used for larger cookware.