Hamilton Beach Stand mixers: is it a better value than KitchenAid? 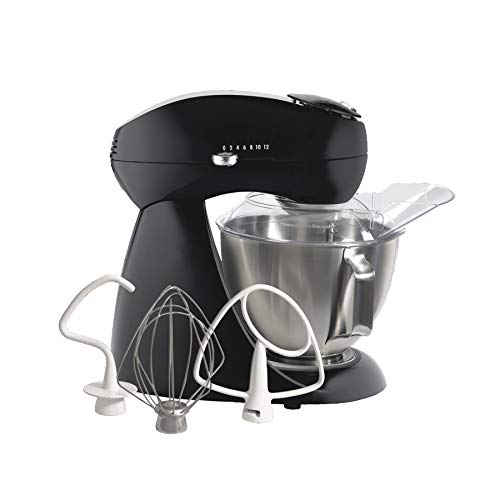 Whisking onto the winner's podium as the best Hamilton stand mixer is the Hamilton Beach 63227 Electric Stand Mixer in licorice.

As is often the case with Hamilton mixers, scraping the mixture from the bowl sides will be necessary – plus, the top-heavy design and awkward accessibility of this model could be an inconvenience. However: notwithstanding the negatives, this mixer is a class above its competitors for its sturdy build, simple cleaning, easy operation, and mixing magic.

With up to double the speed settings of its brand rivals, a larger bowl capacity, and wielding a whopping 400 watts of whizzing power, this mixer can handle a generous variety of culinary creations without clunking out.

Though perhaps not the most suitable choice for commercial-scale cooking, this model still has the mettle to handle most average household baking needs – and, although the priciest of our trio, does not break the bank for a decent slice of the customer demographic.

Users agree that this is marvelous at mixing – powerful and quick yet smooth and quiet with many customers rating it as good a mixer as some KitchenAid models, yet not as noisy. Although this mixer has a lower wattage (400w) and a smaller bowl capacity (4.5qt.) when compared to many KitchenAid models some buyers felt it still gave the kitchen King Kongs a run for their money.

The quality construction of this machine has also impressed buyers, with its strong build, fully metal attachments, and 3-year warranty rated as major plus points – with reviews suggesting that it also has the durability to last the distance.

This mixer also ticked buyer boxes for both easy use and convenient clean-up. The splatter shield minimizes splashes, the attachments are dishwasher safe, and the mixer itself can be kept spick and span with a quick wipe down.

Despite its sturdy construction, it is also still light enough to transport – and stays put even when on a high-speed setting. Although there is a more limited choice in mixer attachments compared to a KitchenAid multi-purpose hub mixer, it is seen to be sufficient for most user’s needs.

Consumers have not, however, been as complimentary about the mixer’s ability to handle higher intensity mixing tasks. Bulkier batches have been known to cause this blender to rock, shake, and even smoke – especially when faced with denser doughs.

Purchasers are also not fans of the persistent need for repeated mixture scraping from the bowl sides during the mixing process – and the paddle provided is deemed to be inadequate to execute this efficiently. Moreover, some users think that the spatter/pouring shield can be obstructive when trying to operate the mixer’s motorhead, and can make the process even messier.

Another common complaint with this mixer is that its top-heavy design can make it awkward to work with, arduous to move, and can even cause the mixer to topple over. Moreover, the bowl diameter is narrower than other similar models, which can make adding ingredients a nuisance.

Made from durable, die-cast metal, this model comes with a 4.5qt. mixing bowl with a handle, a splatter/pouring shield, and a selection of mixer attachments including a flat beater, dough hook, and whisk – all forged from stainless steel and fully dishwasher safe.

Aside from the mixing issues mentioned, this model is pretty competent. It’s a smooth operator which can handle various home baking projects, and it scarcely makes a sound in the process. Its robust metal construction also offers heightened resilience to both the mixer and its attachments.

The overall consumer consensus is that both using and cleaning this machine is a breeze. Its attachments can be de-battered with a quick run in the dishwasher, and the splatter shield confines most of the mixture to the bowl, minimizing mess. Its operating system is also readily accessible and within easy reach.

Yes. Despite its faults, this machine also possesses a flush of positives – the combination of which holds it in good stead as a force to be reckoned with, even for mixers at a higher price point. 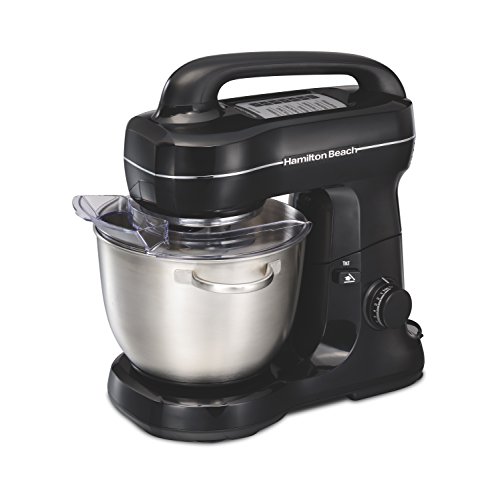 Customers widely recommend this model for the value they feel it offers for the cost. At a fraction of the price of an elite KitchenAid appliance, the extras which come with this model – such as a splatter guard, easy view speed guide, simple locking mechanism, and suction cups which secure it firmly to the surface – have all received acclaim.

Another major perceived positive of this model is its uncomplicated usability. Buyers are fans of the efficiency of its flat beater, dough hook, and whisk, whilst its handle and orbital mixing operation (often features of fancier models) also received a thumbs up.

Buyers have also expressed a liking for its lightweight design. Weighing in at a little over 12lbs, this model can be lifted and moved with ease, whilst the base suction cups keep it stationary. Some purchasers even express a preference for its plastic build over Kitchenaid’s metal design due to the increased portability it offers.

Many purchasers are less than pleased with this model’s poor performance. Customers confirm that the mixing motion leaves much to be desired, with space limitation, struggling with thicker mixtures, and insufficient mingling of smaller quantities common issues. Buyers also quote various gripes with the beaters, which are either too short, stop working when clogged, or barely skim the batter at the sides – leaving users with an uneven finish.

Another noted customer negative is the need to constantly scrape mixture from the sides of the bowl, where it often gets shoved when in operation. Mixtures of a drier, denser consistency are often a mountain to climb with this mixer – an issue only aggravated by the curtailed beater length and a fussy dismantling process to resolve the problem.

Rarer grievances aired by customers include a thumbs down for the smaller bowl capacity and flimsy plastic parts, which can hinder its ease of use.

The Hamilton Beach Electric Stand Mixer with Top Handle features a mixing guide, a 7-notch speed setting, and a single beater planetary mixing motion. With a tilt-up head design and 300 watts of power, it is made from metal and plastic and comes with dishwasher safe accessories including a splatter shield, a 4qt. stainless steel mixing bowl and dough hook, flat beater, and whisk attachments.

Overall, performance is not viewed by purchasers as a noted plus point for this model. Various issues have been raised in regards to a lack of mixing punch and a poor design. Some batters are a battle with this machine, with many users feeling disappointed with subpar mixing results.

Users do, however, rate this mixer highly for its simplicity. Its accessories are easy to attach and remove and raise few complaints in and of themselves. Nevertheless, buyers voice maintenance issues with the machine when it is in use, with beater bugbears and regular scraping required to get reasonable mixing results.

Possibly. At the midpoint in terms of price, this mixer is an affordable alternative for those wishing to bake occasional smaller batches of their sweet or savory favorites as a treat – but for larger households and the more elite or established bakers, this is unlikely to rise to the challenge. 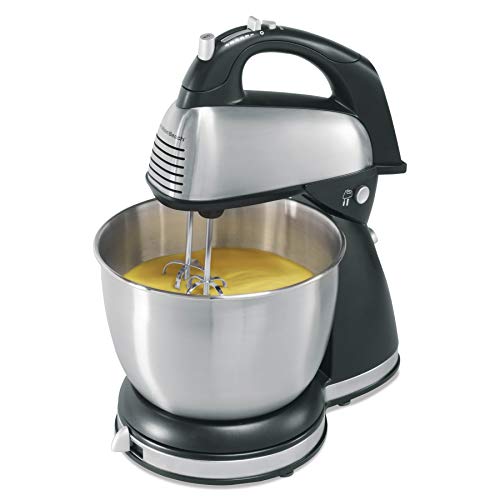 Customers commend this mixer for its desirable design. Its dual function allowing it to work as either a stand or hand mixer has received a thumbs up, as has its slimline form, which enables the mixer to slot into smaller kitchen spaces.

Purchasers are also pleased with the modest price of this machine. As the cheapest in the line-up, many feel that this provides a handy starting point for beginner bakers and those looking for a light use appliance – and the 290 watts of power and its 4qt. bowl capacity is thought to be a bonus for the cost.

This model’s straightforward system and low level of maintenance are also liked by users. Despite its attachments not being dishwasher-friendly, the overall opinion is that it is virtually drama-free to use and keep clean.

A common consumer gripe with this mixer is that it has a weak motor. Buyers are not impressed with its lack of muscle to deal with doughs and mash potatoes – nor with its tendency at times to emit a burning smell and/or smoke when in use. Some users have even reported it breaking down after as little as a month after purchase.

Another recurrent rebuke for this model is concerning its plastic build, which a substantial slice of buyers believe is of shabby quality. Umbrage has been aired by users regarding cheap construction and basic beaters – and metal shavings peeling from the attachments when they are washed (or even attachments arriving rusty) is not unheard of.

Another frequent issue for those acquainted with this mixer is the badly designed beaters. Most have confirmed the beaters as not long enough to reach the bottom or sides of the mixing bowl – which can make use of the machine a rather messy process. A fair number have also noted the mixer as quite noisy.

The Hamilton Beach 64651 Classic Hand and Stand Mixer is a detachable 2-in-1 stand and hand mixer with Quick Burst action, 290 watts of whizzing power, and 6-speed settings.

With a modern black design and boasting a mess minimizing bowl rest feature and a stainless steel 4qt. bowl capacity, this model comes with a beater, dough hook, and whisk attachments.

Overall, users are not overly impressed with the operative capabilities of this machine. Despite a power outage of 120 volts and 290 watts, the customer consensus widely confirms the mixing action to be rather feeble, with beaters which are far too short and fragile to be adequately efficient – though it was recognized that expectations have to be adjusted for where it sits on the price scale.

Users rate this appliance as hassle-free to keep hygienic and uncomplicated to use – which does not seem to be notably hampered by its elements not being dishwasher safe. Home bakers are also happy with the value added by the mixer’s dual function ability, easy detachment design, and decent bowl volume.

Unless intended to be used only rarely for easier tasks, probably not. It does not have the horsepower to handle anything more heavy-duty than light, simple mixes – and is not well designed for daily or more daring use.