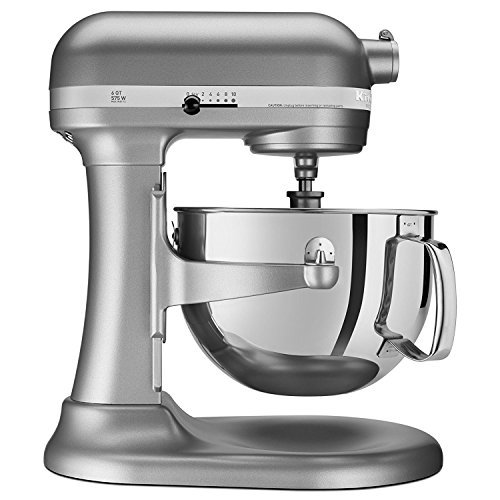 There is no doubt that this machine makes a bit of a din when in use, and its bowl setup arrangement could do with some improvement. Nonetheless, both the class and combination of this mixer’s star qualities – simple use, solid construction, sleek design, and sheer brute power – elevate this mixer to a league above the others in the line-up.

Despite being a refurbished model, this mixer is a quality kitchen gadget that has what it takes to compete with brand new machines and appeal to a wide demographic of customers of varying culinary aims and adeptness – and as the cream on the cake, this modern machine is low maintenance and looks splendid on a kitchen surface. 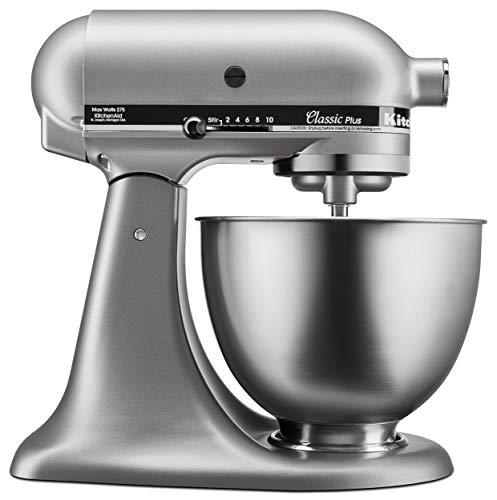 Customers confirm that this machine mixes well, with points awarded for its ability to handle single-batch batter and to blend ingredients beautifully. It also received a thumbs-up for the convenience allowed from its automated operation and its attachment versatility.

Purchasers also praised this machine for its easy usage. The bowl is reported to be readily accessible and simple to lock in and out of the mixer. Also, the machine is easy to clean and maintain, with the attachments washing well – and users like the lack of space taken up by its light, slimline design.

Buyers also salute this model for its sturdy build. It was observed to stay steadfast during use (even when set to the higher mixing speeds) and is rated as a solid starter machine for smaller families or the more part-time bakers.

The most common complaint about this mixer is that it has a measly motor, with some opinions that the 275 wattage is not up to the job of triumphing over a thick dough, maintaining a consistent mixing speed, or does not have the durability to last far beyond 100 uses – with some having to resort to manual mixing to ensure the batter was adequately blended.

This machine has also raised a handful of rarer issues from users. The most notable is that parts of the plastic coating chipping off on the attachments, rusting after dishwasher-safe parts are rinsed in the dishwasher and that either the 4.5qt. bowl or the mixer itself is too small for practical use.

The KitchenAid KSM75WH Stand Mixer is crafted from stainless steel and at just 22lb, is the lightest mixer in the line-up. Operating at 275 watts, it is fitted with a locking tilt-head design, a 59 point planetary mixing system, and a 10 level solid-state speed setting.

Made entirely from metal, this mixer comes with a coated flat beater, a coated dough hook, a 6-wire whip, and a 4.5qt stainless steel bowl. The multi-purpose mixer hub can also be used to power a variety of other food preparation attachments.

Overall, customers observe that this model performs pretty well for what it is. However, a fairly substantial number feel that the lower wattage level limits its power to pulp the thicker cooking substances.

This mixer has been confirmed as pretty easy to tidy and maintain, with the detachable elements weathering well when washed. It has also been rated as straightforward to use, including the installation and removal of its components.

Perhaps. With its competitive costing and prominent positives, this mixer is one worthy of consideration for amateur bakers who wish to whip up an occasional home-made treat. However, for the more committed cake makers and commercial cooks, with a small mixing bowl and weaker wattage, this model is unlikely to withstand the heat.

Users of this model unite to highly recommend it as a machine which mixes magnificently – whether it be bread dough or body butter, this powerful appliance can handle a range of recipes with muscle – it can take the punishment of professional prepping and it has even been claimed that it can shred chicken without so much as a sweat.

Buyers also love the look of this mixer. They were impressed by the lack of signs of wear and tear on the refurbished machine, and the consensus is that it blends into the kitchen beautifully – its presence assures visitors that you mean business with your baking. Users also vouch for this mixer as easy to set up and use, with the instructions and registration are easy to follow – and clean-up is believed a breeze, even with hand wash only attachments.

One of the most prominent problems aired with this product is concerning the bowl. Users have commonly claimed that there is a space discrepancy between the paddles and the bottom of the bowl which makes mixing awkward and is difficult to remedy, causing it to fail the ‘dime test’. Also, some buyers have struggled to set the bowl in the mixer.

A second sticking point for purchasers is the noise. Some rate it as either too loud or as making an unpleasant clunking noise, especially when handling heavier batches – either way, it does not appear to be one of the quieter of its kind. Users have also infrequently raised the issue of the coating coming off mixer attachments when washed.

The KitchenAid RKP26M1XSL Professional 600 6-Qt. Bowl-Lift Stand Mixer is a refurbished version of the higher-end model, tested and certified to work and look like new. Contemporary and constructed from durable die-cast zinc with a full metal form, it operates at a ferocious 575 watts with a mighty 1.3HP motor.

This machine boasts a bowl lift configuration, removable pouring chute, planetary action mixing, high precision controls, a safety stop, and wire guard, and 230V of power. It comes with an array of dishwasher-safe stainless steel attachments including a whisk, flat beater, dough hook, and a large 6.9ltr (6.07qt) stainless steel mixing bowl with a handle – plus this refurbished mixer comes with a minimum 90-day warranty.

Users are in unanimous agreement that this machine has a monster of a motor that ensures (when aligned well) that the mixer performs impressively, even when faced with the most daunting doughs. Unfortunately, it is not the quietest of implements, and navigating the nuances of the bowl can be a nuisance.

Buyers agree that this mixer is hassle-free to use and maintain. Setup is a straightforward process, and notwithstanding the non-dishwasher-safe attachments (which are viewed as a worthwhile sacrifice in light of the mixer’s other appreciated assets), clean-up is drama-free.

Yes. Though some would be wary of purchasing a refurbished edition of an upmarket kitchen appliance, the glowing reviews this mixer has received appear to allay most misgivings. This is a mixer with the efficiency and equipment to cater to anyone from beginner bakers to commercial chefs at minimal maintenance – as long as the buyer can live with a bit of loudness and the willingness to get to grips with bowl configuration. 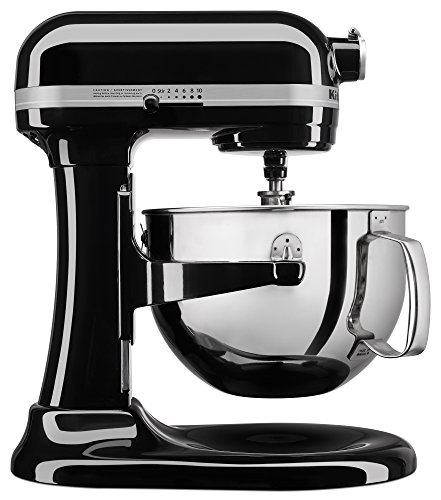 Users vouch for this being an excellent machine, which works well enough to smooth a selection of mixtures into shape in a timely fashion. There is also general agreement that it is simple to set up, operate, and clean – and that overall, it has exceeded expectations.

A sizeable slice of customers has also awarded this mixer applause for its quality construction. Its large capacity bowl allows for double batch baking – and its hook is durable enough to handle some dough, yet still delicate enough to whip eggs well.

Many food preppers are also fans of its attractive appearance, with the opinion that it coordinates well on the countertop with other kitchen gadgets. Moreover, it has been awarded points for its selection of speed settings and accompanying accessories.

Purchasers have noted several negatives regarding its operation. Buyers gave this model a big thumbs down for a difficult bowl setup – the bowl either can be a nightmare to remove from the mixer or is not fitted firmly enough, and the process of affixing the attachments so that they line up with the bottom of the bowl can be an arduous task.

Users have also taken umbrage with the motor mechanism, which has been noted as weak and noisy. A sizeable section of home bakers has described it struggling with the more substantial dough mixtures, with a consistent, piercing loud noise when in use that can be unsettling.

Customer consensus also concludes that the mixer is of low quality, with the opinion that it runs rough and that both the mixer and attachments are crafted from cheaper, flimsier materials – with doubts as to its durability to last the distance. Some buyers have also raised a bone of contention over the presence of black residue on the machine and its parts, even post-washing.

The KitchenAid KL26M1XER Professional 6-Qt. Bowl-Lift Stand Mixer spins a 67-touch point rotating planetary mixing action. Rocking a vivid red edition, it is crafted from zinc with 10-speed settings, a bowl-lift design, and a hinged hub cover, and whips up to 575 watts.

Its accompanying accessories include a power knead spiral dough hook, dough beater, a 6qt. Stainless steel mixer bowl, and a stainless steel wire whip – plus a further 15 attachments sold separately are compatible with this model.

This mixer can beat most batter blends decently, with users not having to wait long for the results. However: despite whizzing at 575 watts, this machine appears to have its limitations in terms of the density it can deal with.

Buyers vouch for this mixer on the minimal management needed to keep it working well. Aside from the residue issues, keeping it pristine is regarded as an easy process, and there are next to no issues with its setup, navigation, and day-to-day operation.

Possibly. This is a sturdy kitchen tool that does a good job at jamming up a variety of culinary concoctions, and can cater to double batch projects – plus it is super simple to use. However, the fragile attachments and trouble this machine has with tackling some thicker mixtures are likely to get a thumbs down from the more ardent bakers.