Our favorite list of toaster models for the perfect breakfast toast 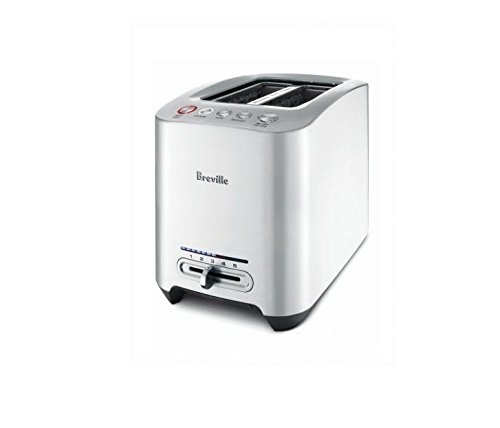 If you thought that toasters had peaked with the advent of the shade-selector and automatic pop-up, think again. Breville’s innovative design of their 2-slice smart toaster is the pinnacle of toasting technology.

With an automatic lowering system, ‘lift and look’ & ‘a bit more’ features, and a LED notification panel, Breville’s BTA820XL appliance redefines the toaster genre. It’s also the best bagel toaster on the market. However, the Breville quality comes with a Breville price tag which is notoriously high. 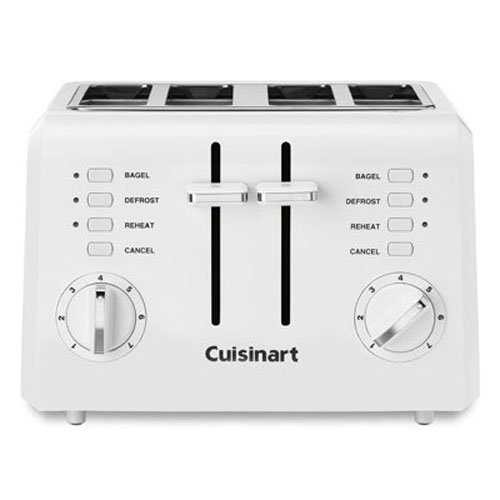 The only appliance to feature on our list twice, the Cuisinart (CPT-142P1) 4-slice toaster, represents tremendous value for money thanks to its four slice capacity, compact design, and ability to cook different types of toast simultaneously.

This toaster is perfect for families to make larger batches of toast to suit different tastes without spending massive amounts of cash.

Toast has been around for hundreds of years, and with good reason. It’s delicious and easy to make. It was made easier still with the invention of toasters. Gone have the days of forgetting about your bread under the grill and turning your bread into charcoal.

As brands got more inventive with their toasters, so too did the people using them. Toasters need to be able to do more than toast bread (though in some cases that all people want them for); they need wide slots, larger capacities, extra features, and be able to toast bagels.

These criteria are precisely what we’ll look at in this list, examining the best 2-slice toasters, 4-slice toaster, the best toaster for bagels, the best long slot toaster, and which budget appliance is worth your consideration if you don’t want to spend more. 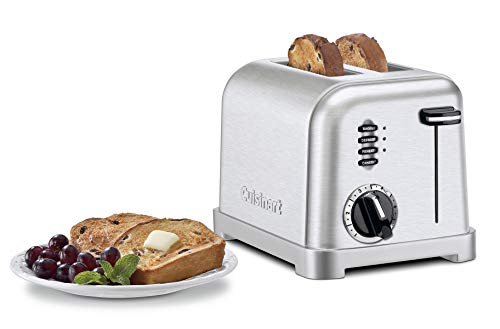 Not everyone needs or wants a giant toaster. 2-slice toasters are ideal for single folks, people who occasionally fancy a couple of slices of heated bread, and those who have limited kitchen space.

The Cuisinart toaster shows an all-around performance that definitely stood out among its peers.

The attractive Cuisinart CPT-160P1 has a stunning stainless steel exterior and a BPA-Free interior ensuring each and every slice of toast is delicious and clear of toxins. The wide 1.5-inch toasting slots can accommodate even thick, unevenly sliced bread with relative ease.

With multiple toast settings, you can make toast, bagels, defrost, and reheat bread or toast without browning it further. There’s a cancel button for bringing a swift end to the toasting cycle.

You can also customize toasting to suit your preference with CP-160P1’s shade control, which has six settings.

A removable crumb tray also removes the frustration of the clean-up process, and this machine comes with a 3-year warranty.

Some consumers have expressed concerns about the Cuisinart CPT-160P1’s ability to toast evenly. Yet, many others have had no issues, so it’s possible you may end up with unevenly toasted bread. However, this issue is a common problem among most toasting appliances.

Occasionally, depending on your bread’s thickness, your toast won’t pop up quite high enough to be removed, and you’ll need to pull up the lever up to get it out manually. 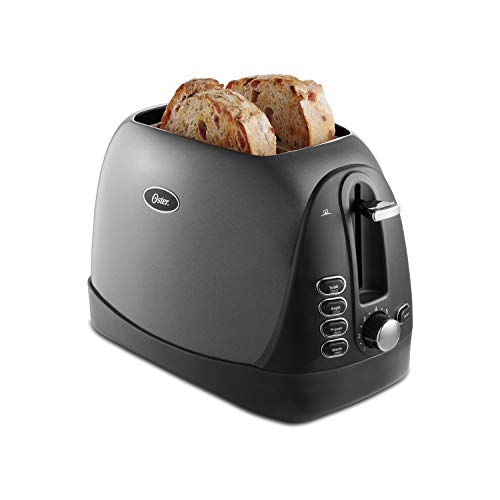 Oster’s 2 Slice, Bread, and Bagel Toaster came in at a close second, as it offers comparable results to the Cuisinart 2-Slice model at almost half the price.

You’ll need to make a concession or two if you choose the Oyster appliance, as the toasting slots are narrower than its Cuisinart counterpart, the bagel setting is poor. This toaster only comes with a 1-year warranty, which is considerably less than the Cuisinart CPT-160P1.

If you’re a toast addict (or need to make breakfast for more than one person), a 2-slice toaster won’t be adequate for your heated bread needs, and you’ll need a 4-slice appliance.

However, you don’t need to sacrifice kitchen space to accommodate your toast habit, as the Cuisinart CPT-142P1 compact toaster gives you the performance and capacity you need in a relatively small footprint.

Like Cuisinart’s 2-Slice toaster, this appliance is loaded with features like a slide-out crumb tray, a seven shade setting dial for precise toasting, three presets (reheat, defrost, bagel), and the wide 1.5-inch toasting slots, which are adequate for smaller bagels.

The Cuisinart 4-slice toaster makes perfectly even toast on each side, though there’s a slight issue we’ll cover in the ‘Bad’ section.

What separates the Cuisinart 4-slice toaster from its competitors is the dual controls.

While everyone loves toast, we don’t all like it made the same way. This handy split-control system lets you toast separate rounds of 2-slices independently of each other, giving you complete control over your toast. Choose completely different shade settings, or toast something entirely different altogether at the same time.

Buy the Cuisinart CPT-142P1 with confidence, as this model sports a 3-year warranty to cover most (but not all) problems that might occur.

As we mentioned, this appliance toasts each slice of bread evenly; however, there can be differences between each control system. Set at number four on each side (for instance) can produce noticeably different results.

Despite the inclusion of a crumb-tray, some consumers have expressed their frustration at the build-up of crumbs inside this appliance that can only be removed by tipping the whole thing upside down.

A lack of a single-side toasting option is a disappointment for a large toaster such as this, though it’s not a common feature in this type of appliance. 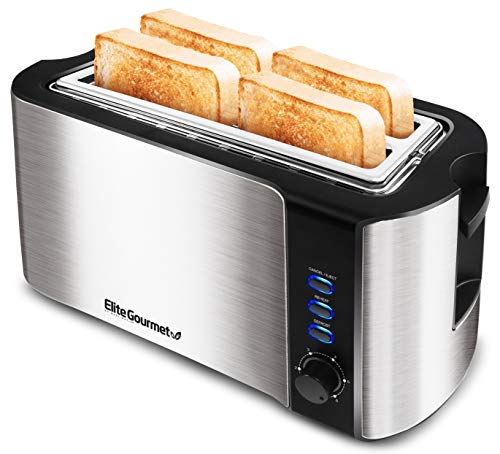 The Elite Gourmet ECT-3100 4-slice toaster is a superb alternative if you don’t have a use for the dual settings. It has a warmer rack situated above the toasting slots for heating/warming up specialty bread like croissants or cinnamon rolls.

Just watch out, as the internal spring tension has been known to launch toast, bagels, and pitas straight out of the toaster and onto the countertop instead of your plate.

While most toasters nowadays have the bagel setting, very few are actually able to toast bagels properly. If toasting bagels is non-negotiable for you, look no further than the Breville Smart Toaster.

Toasters have barely changed since their invention, yet Breville’s 2-slice smart toaster has brought this genre of appliances roaring into the digital age.

The stunning toaster comes equipped with settings that let you cook from frozen, make perfect crumpets, and a light indicator that acts as a countdown timer, so you know how long you have to wait until your food is ready.

With no levers and springs, the Breville 2-slice smart toaster has an auto-lift/lowering system that’s smooth and quiet.

Taking consumer feedback into account, Breville added a ‘Lift and Look’ button to their appliance so you can check on your toast’s progress and ‘A Bit More’ button if your bagel isn’t quite to your liking and you want a little extra doneness.

This beautiful appliance is the pinnacle of small toasters.

As with most electronics, longevity and reliability may be an issue. While most consumers are happy campers, a few have experienced technical problems that have been troublesome to rectify (considering Breville’s less than adequate customer service).

And then there’s the price point. The massive, massive, price point. This toaster is one of the more expensive appliances on the market, and considering it only has two slots; it could be out of budget for many people. 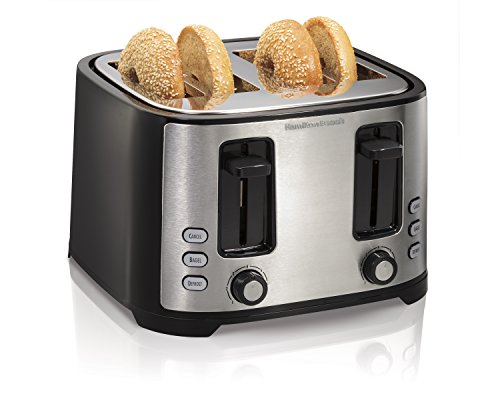 If you’d like an appliance that toasts bagels properly at a more affordable price point, take a look at Hamilton Beach 24633 Extra-Wide Slot Toaster. Though it has fewer features than the Breville, you can toast more bread/bagels, and it has separate preset and temperature settings for each side.

Sure, it may not perform as well as the Breville BTA820XL and has fewer bells and whistles, but this one is made with bagels specifically in mind and has a much lower price point.

Consumers regularly complain that the slots in their toaster aren’t large enough for all types of bread. While extra-wide slot toasters deal with bread thickness, you’ll need a long-slot toaster if you like longer loaves of bread. Enter the Oster 6382 Inspire 4-Slice Long Slot Toaster.

The Oster 6382 has two long slots measuring 10.5 x 1.5 inches to hold even the longest slices of bread. Alternatively, it can toast four regular slices simultaneously, making it the best wide and long slot toaster.

It has seven shade settings, and four presets (Toast, Bagel, Frozen, and Warm) to accommodate different types of bread and other preferences. The anti-jam feature causes the toaster to automatically switch off when bread gets stuck inside.

This sleek appliance comes in four different color options, and the stay-cool exterior is a nice safety feature.

As this toaster is designed with larger slices of bread in mind, small items can be tricky to get out and don’t pop up high enough for you to grab them with your fingers. Never use metal objects when trying to retrieve toast like this.

The power cord is poorly situated near the control panel, limiting the position choices of the toaster in your kitchen. 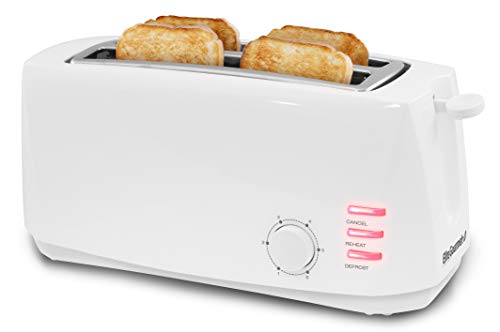 Elite Gourmet ECT-4829 Maxi-Matic 4 Slice Long Toaster is a worthy opponent to the Oster Inspire appliance. Although its slot measurements are not as big as Oster’s at 10 x 1.25 inches, it has a toast lever for easier bread removal after toasting and a classic white aesthetic. This toaster is simple and easy to use.

If you’re looking for a small toaster for occasional use, you don’t want to spend vast sums of money on all-singing, all-dancing appliances. In this instance, budget models (particularly the Cuisinart 4-Slice Toaster) are worth your consideration.

Featuring for the second time in our list, the Cuisinart 4-slice toaster is the best appliance with a low price point. This gorgeous toaster brings so much to the kitchen table for a relatively small outlay.

It’s worth mentioning that once more, that this appliance has a dual toasting system, wide slots, preset features, and a compact footprint that’s unrivaled by machines in this price range.

Alongside the previously stated pitfalls to this 4-slot toaster, the price point just barely comes in under the “low price” criteria. 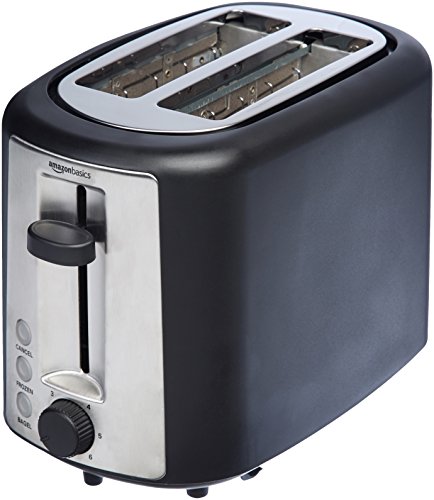 As the name of this appliance suggests, an AmazonBasics 2-slice toaster is a super cheap toaster. It’s a simple device that heats bread at five different temperatures. Surprisingly, this basic toaster has ‘frozen’ and ‘bagel’ settings which work adequately.

While there’s not much else to this toaster, it provides good value for money.