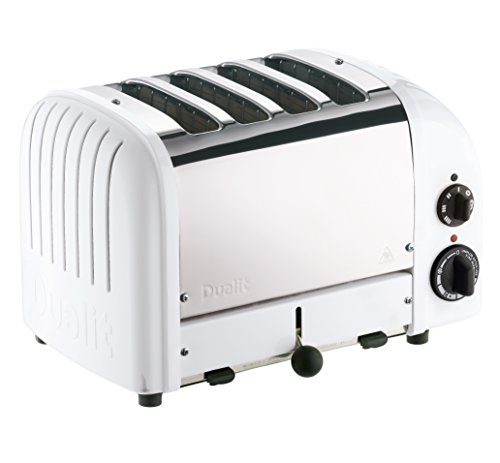 This is the best value toaster from Dualit. It's main advantages are:

These toasters offer similar or better features for a significantly lower price:

Dualit has been producing high-quality toasters perfect for home use or commercial duty for decades. Their durability is well-known in the market, although their worth has been put in question during the last years.

Since Dualit is a premium brand, all listed models have the following features:

The Dualit 47513 New Gen Toaster is the most sold Dualit toaster model on Amazon. This item is designed and assembled in Great Britain.

There are many benefits to the 47513 NewGen Toaster. The wide slots, special features such as the fact that you can keep your toast warm even if you don’t eat it immediately after it’s done, and durability make it a very good choice. Overall, clients have found great value in this toaster. Despite the high price tag, it might be worth it if you’re a toaster lover and you will be making toast constantly. It will be especially worth it if you’re a business owner in need of a powerful 4-slice toaster that can be easily repaired in the future.

This classic 2-slice New Gen Toaster is assembled in Great Britain. It’s designed very similarly to the 4-slice New Gen. However, the size is much smaller.

This model is perfect if you have a small kitchen. In addition, if you enjoy the retro style, then the quirky design will also fit in perfectly with your home. Furthermore, if you own a restaurant in which toast is not often requested, it also makes sense to have a smaller yet durable design such as this one. This will allow you to make better use of your space for other items that you might need to use more often. However, if you don’t eat toast often or if you plan on having it stored and only use it every now and then, then it might not be worth the price.

The Dualit 46555 is one of the sleekest toasters out there. And yes, we used the term sleek to describe a toaster. That’s precisely the goal of this design series. This way, you’ll be able to integrate it with the modern decoration of your kitchen, be it at your house or your business. Most of the parts of this Design Series Toaster are made in China.

The 46555 4-Slice New Design Toaster looks great. This makes it perfect for when you have it places in a very visible place and you don’t want it to look out of place. The possibility of taking a look at your toast before it’s done without turning off the toaster entirely it’s a definite plus. This is even more useful if you own a food business in which clients might have specific requirements. However, due to the lack of durability and manufacturing defects that have been occasionally reported, we think the stylish appearance might not be worth the quality and price of this toaster.

This toast looks great and the fact that it’s so lightweight makes it perfect if you need to move it around constantly. However, the numerous reports regarding manufacturing defects make it an unattractive option. In addition, considering the high price it comes at, this investment might not be worth the results you’ll get.

Other considerations about Dualit toasters are related to the company as a whole. Dualit is a brand on the pricier end of the spectrum. Despite this, there have been numerous complaints regarding the customer service of the company, which will make it difficult for you to solve any issues that might come up.

Some clients that have previously owned a Dualit toaster and replaced it with a new model of the same brand have felt unsatisfied. Reportedly, in some cases, the quality of the product is not the same as it used to be.

Due to the numerous cheaper options available as well as negative customer reviews, Dualit’s toasters as a worthy investment has been put into question.