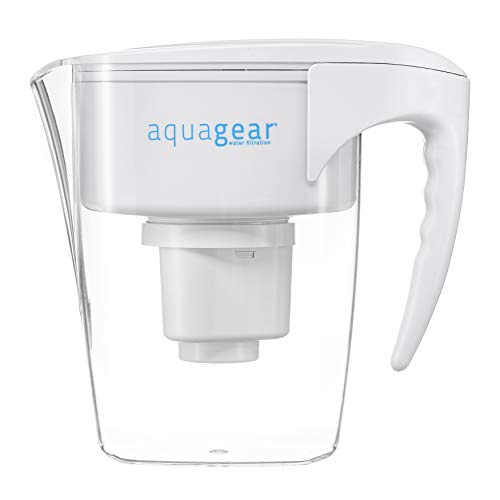 This Aquagear model is an above-average water filter pitcher. It’s able to remove more contaminants than many other standard water pitchers you would find in the market. It has earned lots of positive ratings because of its efficient filtration system that’s capable of even blocking fluoride. The majority of users were also very pleased with its overall build quality.

The Aquagear pitcher has a very simple design featuring a clear filtered water reservoir at the bottom and a white filling chamber and handle at the top. There’s nothing fancy about it and it has a slim profile that takes up little space – it can easily fit at the fridge’s door.

It’s rather heavy though – it weighs over 3 pounds when completely empty. Once you fill it up, it’s even heavier to move around. However, the handle is substantial hence it won’t break apart easily, plus it has nice grooves that provide a secure grip. It doesn’t meet the back of the unit either which is convenient for those with larger hands as they won’t struggle to hold it.

The build of the unit itself appears to be very sturdy, made of durable BPA-free plastic. It’s a strong pitcher that can last a long time and there were no cases of water leakage – Aquagear has included a rubber seal between the filter and the pitcher wall which forms a tight fit hence preventing water from leaking through.

Most users were extremely pleased with the filtration performance of this Aquagear pitcher. It’s not certified by the NSF, however, it’s rigorously tested by independent labs and found to meet the NSF/ANSI standards 42 and 53. It utilizes a unique approach for filtering that includes chemical bonding, depth filtration as well as absorption.

The filtration system contains two separate filtration media that have been layered into 5 stages thereby creating a much robust filtration system that’s capable of effectively clearing out over 80 contaminants – that’s more than what standard water pitchers can remove.

The first media is activated coconut carbon which traps and absorbs most of the chemical contaminants including chlorine (99.9%), chloramine (99.9%), odor, and taste. It’s also quite effective at removing fluoride (90.06%) which is one contaminant most pitchers fail to remove.

We found a few users though who claimed that there was no noticeable fluoride reduction in their water. However, the rest (about 80%) agreed that it did clear out most of the fluoride.

Calcium, magnesium, and other healthy minerals are not removed during the filtration process. Nearly all the customers mentioned that they could taste the difference between the filtered water and the water from their taps. The filtered water has a better taste and comes out crystal clear with zero particles in it.

The downside is that the system doesn’t filter out microorganisms. You can only use it on microbiologically-safe water like heavy contaminated municipal water but not well water.

The filtered water reservoir has a capacity of 0.5 gallons which is about 8 standard cups of water when it’s filled completely. It’s not a very large pitcher but it’s sufficient for one person or a small family.

The upper filling chamber is not that large either, although it requires only two refills to fill up the filtered water reservoir. The filtration rate is moderate when the filter is new, but it slows down significantly within a few weeks of use – it can take up to 3 hours for a single refill of water to filter through.

Pouring water from the pitcher appears to be a bit messy too. The spout cover has a poor locking mechanism – it doesn’t flip when you pour hence water tends to go everywhere unless you manually hold it open. The lid also sometimes falls off while pouring causing water in the filling chamber to splash all over.

Another issue is that you can’t pour any filtered water when the system is still actively filtering. You have to wait for all the water in the upper chamber to filter through before pouring, otherwise, unfiltered water will also pour out into the cup along with the clean water.

Filling the upper chamber is equally frustrating because you can’t see or tell whether it’s full or not. You have to take the cover off every time you need to refill it and once it’s full, then set the cover back on. Failing to do so can lead to unfiltered water overflowing and ending up into the bottom portion, contaminating the already filtered water.

Set up and Maintenance

This Aquagear water pitcher model is fast and easy to set up according to numerous users. It takes less than 5 minutes, including flushing the filter in order to start using it.

Maintaining the unit is simple too because the filter is more durable than those of other brands and changing it is a pretty straightforward process. It can process up to 150 gallons of water which is 3 times the usual 40-gallon filtration capacity of water filter pitchers. It will last around 4 to 6 months before requiring replacement – others often last only up to 3 months.

Unfortunately, there’s no filter change reminder. You have to mark the date you set up a new filter so that you can keep track of when to replace them.

One major issue we noted is that the unit is very prone to mold build-up. There were many complaints of mold growing on the filter, inside the reservoir, around the edge of the auto-closing circular flap as well as inside the handle.

Should you buy the Aquagear water filter pitcher?

This is a great option to consider if you want a water filter pitcher that’s able to clean heavily contaminated municipal/tap water. It’s a reliable option too for filtering out fluoride from the water which as we mentioned earlier it’s not something that many pitchers can do.