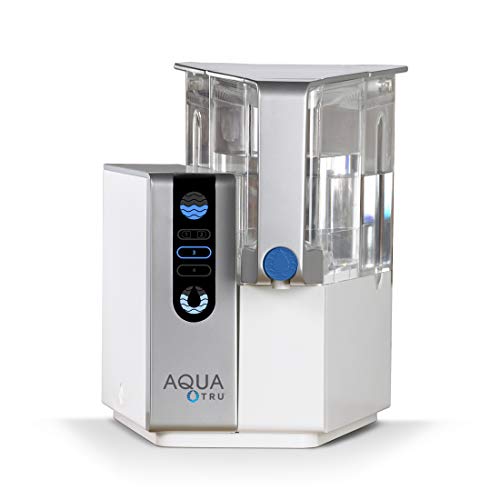 Based in Los Angeles, California, AquaTru is a company that specializes in making modern water filtration products. The innovative design and incorporation of new technologies in their water filter systems have made them quite popular with homeowners as well as small offices.

This review looks at their countertop water filter system and we’ll go over everything to let you know what makes it very popular in the market and some of its flaws, and how they affect its performance and operability.

This AquaTru countertop water filter really stands out from the rest when it comes to visual appeal. It’s sleek and modern in design with a front LED digital display and clear plastic water tanks – it will no doubt enhance the aesthetics of any kitchen sitting atop the counter.

All the components of the unit including the filters are contained within one body which measures 14 x 14 x 12 inches. It’s slightly compact than the conventional bulky RO systems hence doesn’t take up much space on the countertop, however, if you have limited kitchen or counter space, then it may present a problem.

The whole unit weighs 22.6 pounds, so it’s not that lightweight, and carrying it around is tricky since it features built-in carry handles that are inside the rear reservoir. They don’t provide a comfortable and steady grip, especially when you carry the unit when the filtered water reservoir is filled.

Several users also reported that water tends to leak at the base of the front tank causing a mess on the counter. Others as well complained that the plug is too flimsy – it can bend or break easily and it fits a bit too loosely.

The system uses a 4-stage filtration process that includes a mechanical pre-filter, activated carbon pre-filter, ultra-reverse osmosis filter, and activated carbon post-filter in the final stage. These 4 stages eliminate over 80 different kinds of contaminants which are 15X more than what leading pitcher filters can remove.

The first stage is the mechanical pre-filter that clears out all of the sediments from the water including dirt, rust, sand, dust, and other large particles. It also helps get rid of cloudiness from the water.

Stage 2 features an activated charcoal carbon filter which removes as much as 96.6% of chlorine and chloramines. It also gets rid of THMs and bad tastes and odors that result from other chemical contaminants.

The 3rd stage is the reverse osmosis filter which clears out the majority of the contaminants as the water molecules are pushed through its semi-permeable membrane.

AquaTru utilizes here an ultra RO filter which is much more effective at removing impurities than regular RO filters. It’s able to efficiently eliminate heavy metals such as lead (99.1%), copper (95.2%), and mercury.

It as well removes chemical compounds and elements like arsenic, radium (96.4%), benzene (99.9%), fluoride (93.5%), chromium (97.2%), herbicides, pesticides, nitrates, and trace pharmaceuticals. Other contaminants like microorganisms (bacteria and cysts), iron, BPA, and total dissolved solids (99%) are also cleared out by this ultra RO filter.

The final stage features a coconut shell activated carbon filter which gets rid of the remaining chemical contaminants and fine particles that slipped through the RO membrane. It equally gets rid of VOCs and any odors and tastes that the RO water picked up from the storage tank.

Users attested that the resulting filtered water is very clean with no foul smell or taste at all. Some found the taste of the water to be quite plain (tasteless) and this is because all the TDS (99%) are removed from the water including healthy minerals like calcium and magnesium.

The holding tank of this AquaTru model is small in capacity than the standard under sink RO units – it can hold only up to 1-gallon of filtered water at a time. It’s a decent capacity for small families and offices but it would be inconvenient for large households or offices that require a large quantity of water because you’ll have to refill it very often which is a tedious task.

The system does filter the water fairly fast than other units – it takes around 10 – 15 minutes to fill the storage tank with filtered water. Refilling the unfiltered water tank is also simple – it comes out easily and it’s made of a clear plastic hence you can tell when it’s time to refill it.

The wastewater is diverted into a second tank in the back where it can be discarded. However, some users did have difficulty removing the tank as it gets stuck sometimes and the handle is poorly designed such that it doesn’t offer much leverage when trying to remove the tank.

Dispensing water is easy. No twist knobs or slippery lever handles to maneuver, you just push a button and the filtered water flows out. The spout/tap is also raised such that you can fit a tall glass or container under it.

The downside is that it’s a little difficult to control the rate of flow with the button. It’s a great, strong flow which is fine when filling a container or glass but when filling an ice cube tray or a shallow container, the water tends to splash everywhere.

The tap as well doesn’t shut off completely, once you release the dispensing button, water continues to dribble out on the counter for a few seconds.

Besides that, water can get into the handle of the front tank which ends up causing the pump to start turning on and off on its own after a few months of use.

Moreover, the tank for the filtered water has a sensor that’s meant to automatically stop the filtering process once the tank is full, but it appears to malfunction occasionally – a couple of users mentioned that it would randomly turn the pump on and off even after the tank is full.

Being a countertop unit, this AquaTru system doesn’t require installation. No drilling or plumbing is needed like other RO systems – you plug it in and fill the tap water tank and you are done.

Maintaining the unit is equally pretty simple. The filters are easily accessible and replacing them is quick and straightforward. They are screw-in filters, you just twist them off and then screw the new ones in place securely. You won’t also have to guess when to change them – the digital display has an indicator light that alerts you once they need changing.

Should you buy the AquaTru countertop water filtration system?

This is ideal if you are a small household or office and want an RO system but you don’t want to make permanent changes to your plumbing system.  The customer service is, however, not reliable since we noted many complaints that they are often unresponsive or don’t provide solutions in case of defects or other issues with the system.