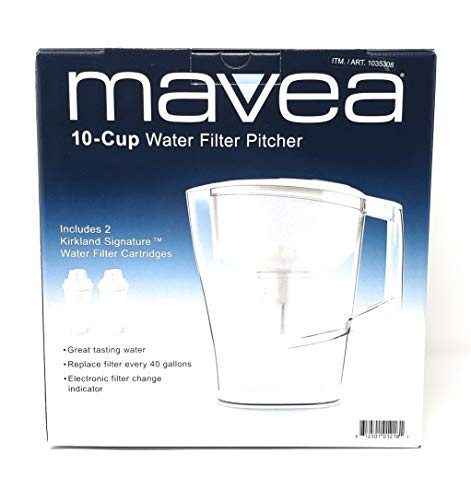 This Mavea water filter pitcher is one of the largest models from the company in terms of holding capacity. It has managed to earn lots of positive feedback from customers not only due to its capacity but also because of its decent filtration performance and ease of use.

Below is our review of one of their models and it covers all the essential things you need to know about it including the good and the bad.

The overall design of the Mavea water pitcher is similar to a normal pitcher but it has curved lines plus a well-streamlined body that isn’t clunky like many other pitchers.

The whole unit is fairly compact, measuring 11.2 x 10.6 x 6.3 inches. It has a small footprint hence won’t take up much space on the counter and its compact profile makes it simple to store.

Handling/carrying it is equally easy. It’s lightweight (2.14 pounds) and has a large, soft plastic handle that’s easy to hold and offers a good grip when carrying the pitcher when it’s filled up. Moreover, the unit is equipped with non-slip rubber feet which help keep it stable on slippery counters and also prevent it from leaving scratches on surfaces.

The main body of the pitcher is pretty durable – it’s made using a sturdy, BPA-free plastic that’s not likely to break quickly when dropped. The flap on the pour spout seems flimsy though and some users did mention that it tends to fall off easily.

The Mavea’s filter is certified against NSF/ANSI standards 401 and 53 hence it’s capable of removing some of the common contaminants found in municipal water. The unit utilizes a two-stage filtration process just like Brita’s water filter pitchers.

The first stage consists of a micro-screen filtration media which serves as a sediment filter. It traps all the sediments present in the water and as well prevents the carbon granules from getting released into the filtered water which is a common issue with water filter pitchers – you can expect no black/charcoal bits in the final filtered water.

The second stage is a combination of activated carbon media and ion-exchange resin which effectively clear out chlorine (taste and odor), chloramine (taste and odor), and heavy metals like mercury, copper, and cadmium. They as well get rid of other contaminants like zinc, benzene, estrone, meprobamate, trimethoprim, and 1,2,4 trichlorobenzene.

The ion exchange resin has a softening effect too hence helps reduce limescale by isolating calcium and other minerals that lead to scale build up – users did report that the unit was able to handle hard water pretty well. Many of them were also pleased with how the filtered water tastes. It comes crystal clear with no charcoal bits in it and no stale after-taste or odor.

The filtration process is rather basic though because the number of contaminants it removes is small. It’s not suitable for heavily contaminated water or untreated water since it can’t get rid of microbial contaminants like bacteria, viruses, and cysts. However, the filter does contain silver particles which help inhibit any growth of mold and bacteria within the media.

The pitcher of this Mavea unit can hold up to 10 cups of filtered water at a time which is a decent capacity that the majority of users seemed satisfied with. It’s just enough to serve a small to medium-sized family.

The water filters through the media relatively fast too – it takes around 10 minutes to fill the pitcher. Moreover, the media itself has a special shape that helps ensure that the flow/filtration rate remains consistent over the lifespan of the filter.

The manufacturer has incorporated a pour-through port/hole on the lid of the pitcher that is supposed to allow you to easily refill water for filtering without removing the lid.

However, it appears not to be that convenient at all because it’s a tiny hole similar to a pinhole opening or an air vent hole. Many users reported that you have to take the whole lid off to get water poured into the reservoir, otherwise you end up spilling water all over the lid and counter. Plus, the lid is very secure when on which makes it a bit difficult to remove it.

Pouring the filtered water into a glass is easy though and there’s little spillage as the pour spout is pointed at the end to ensure that the water flow isn’t scattered all over. The lid also remains very secure while pouring hence you can pour the water while the unit is still filtering.

There’s little to do when it comes to setting up this unit. The only thing required is installing the filter and it doesn’t need priming/pre-soaking before fitting it. You just rinse it and do a few flushing after installing it, and it’s ready for use.

Replacing the filter is a breeze too but you’ll have to do it frequently because it has a very short lifespan. It can process only up to 40 gallons of water which means you will be replacing it every month or less depending on the condition of your source water.

The good thing is that there’s is a digital indicator incorporated on the lid that shows the remaining filter life to allow you to replace it on time. Some, however, complained that the display screen stops working just after a few weeks of using the unit. The electronic meter is also not water-proof.

Should you buy the Mavea 10-cup water filter pitcher?

If you use municipal or any treated water that’s free from lead, chromium-6, microbial contaminants, and toxic chemicals, then it’s worth considering. It will improve the taste and odor of your water, and remove a few other common contaminants. It’s equally a convenient option for those that don’t want to install a bulky under-sink water filtration system.