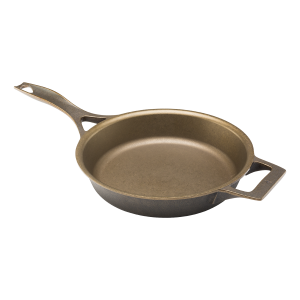 For how many unique features this skillet has, it is a great price:
Check current price
BEST VALUE
Sale 42%

Lodge L8SK3 10-1/4-Inch Pre-Seasoned Skillet
Lodge is the least expensive option out there- even less expensive than Amazon’s own brand! Not only is it the least expensive, it has the legacy and quality to back it up. The only real fault lies in the abilities of the user, so the learning curve of cast iron cooking must be respected.
CHECK CURRENT PRICE

People have been cooking with cast iron for thousands of years – in fact the first known use of cast iron cookware dates back to 220 AD in the Han Dynasty of China! Cast iron cookware as we know it has been in production since Abraham Darby’s invention of the sand casting method of production in 1707, so you could say that this humble cookware has staying power and will continue to be around for ages.

Pretty much all cast iron skillets will have some basic things in common, no matter how fancy you get:

Cooking with cast iron is not without its challenges:

If you’re ready to take the plunge and get your first cast iron skillet, or you’re just wanting to add to your cookware collection, we’ve rounded up a great selection of mid-size (10”-12”) cast iron skillets for any need and any budget.

For how many unique features this skillet has, it is a great price:

Stargazer is direct to consumer brand, meaning you order directly from them so you avoid any middleman pricing. This means you get a much higher quality product for less money than you could from a third-party retailer. These cast iron skillets are unique and have lots of ergonomic features, and were designed by a kitchenware designer who was sick of the low quality and lack of innovation in standard cast iron cookware.

Lodge has been the #1 name in American made cast iron cookware since 1896, and is always a safe bet if you want to transition to cast iron cooking and are willing to learn how to do it properly. While it may not be as fancy or innovative as other brands, the quality far exceeds the price. Lodge sets the standard for cast iron cooking, so it’s pros and cons are exactly what you would expect from using cast iron in general: 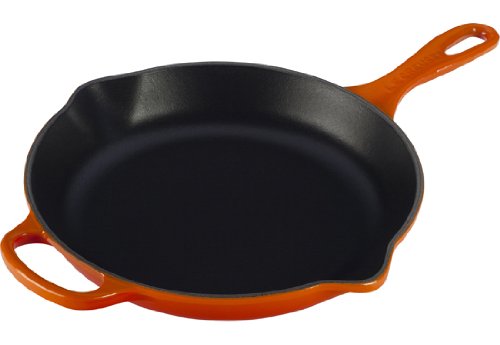 Le Creuset is a French cookware brand known for their high quality, heirloom durability and colourful enameled cookware. Their cast iron skillet is perfect if you are a devoted Le Creuset collector, or if you want an enameled style cast iron pan from a brand that has had recognized longevity.

Yes – if you’re looking for a long-lasting skillet from a recognizable brand like Le Creuset this is a great option. Yes, it is an expensive investment initially, but the ease of cooking without preparing the pan, the color selection and induction compatibility make it a versatile piece you will use often, quickly lowering the dollar-per-use the more you use it. 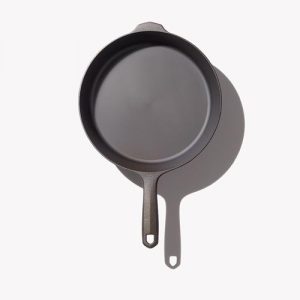 American made cast iron skillet with a smooth interior and very beautiful design. It’s also much lighter than regular cast iron. Unfortunately, this is a very competitive niche and other high-end skillets have more features thus provide better value for your money.

Field Company was started by two brothers in Wisconsin who wanted to replicate the quality of old cast iron pans from companies like Griswold. A very American “do-it-yourself” attitude created these pans, and meticulous research has created a hand casted skillet that has promising heirloom quality.

Not yet – while we love American made and the story behind the company, the consistency doesn’t seem to be there compared to other Made in America brands like Stargazer. Reviewers who love their products REALLY love them, but some of the more average and low reviews bring up some valid points. It’s definitely a company to watch as they perfect their product lines because their love for science and quest for cast iron perfection will likely lead to some interesting innovations on older methods. 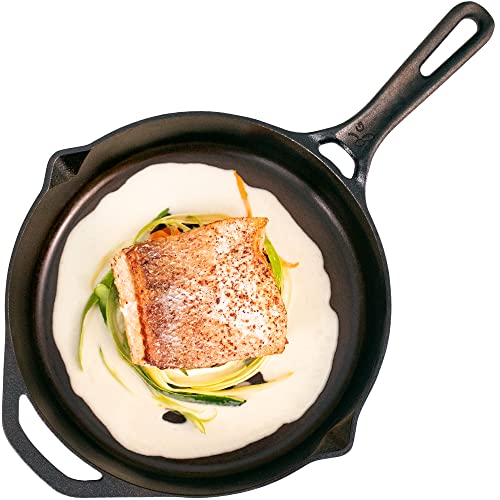 GreaterGoods is a company that lives up to their name: they donate regularly to Love146, a charity with a mission to end child trafficking and help survivors. Their cast iron skillet is also impressive, with lots of features that usually come at a much higher price point.

YES – it was difficult to find many complaints about this skillet, and most had to do with wanting an American made skillet. For the price, this skillet has many more features than roughcast Lodge pans. If you don’t want the same deep learning curve as rough cast iron, this is a great option that is affordable- and charitable! 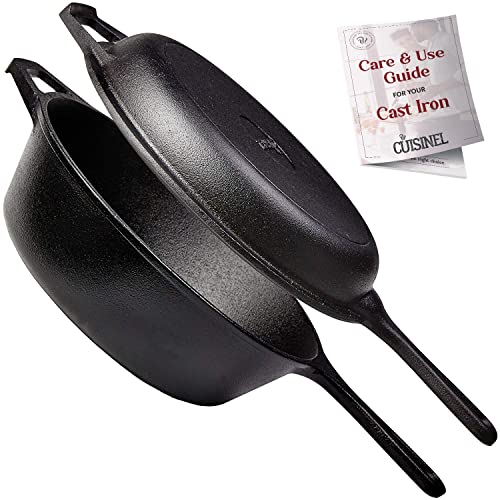 This technically isn’t a classic cast iron skillet, but it felt worth mentioning as it can be used so many different ways: as a Dutch oven, a deep fryer, a skillet, a griddle and more. This “set” is really a deep cast iron dish with a thinner cast iron lid, but since both have handles the lid can also be used as a frying pan or griddle. Cuisinel is well reviewed, and many customers said their purchase was as good or better than Lodge products.

YES – the main “issues” are really just the hurdles everyone encounters when learning how to use cast iron cookware. This combo cooker specifically is great if you want to streamline your kitchen as it can effectively replace a skillet AND dutch oven. Excellent if you’re into the sourdough baking trend! 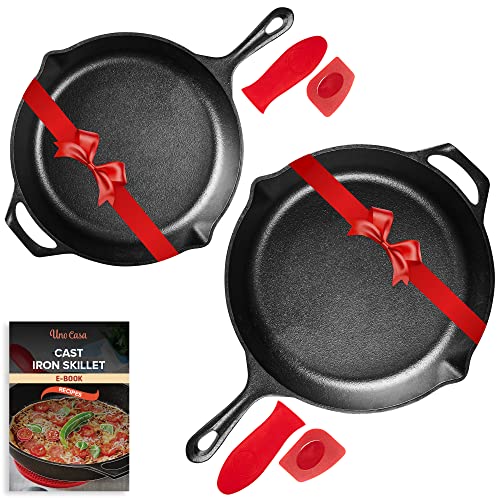 Uno Casa is a less known brand, and are actually more known for their cast iron tortilla presses! It’s difficult to beat the value of this set, however, as it has all the accessories one could possibly need when purchasing a cast iron skillet – or in this case, two! A 10-inch skillet perfect for some eggs or two chops, AND a 12 inch with ample room for a family of four’s dinner, all for one low price.

YES – if you don’t mind cast iron made outside of the USA, and don’t plan on returning the product if you don’t like it. It is an excellent price for two cast iron pans, and the accessories really sweeten the deal. 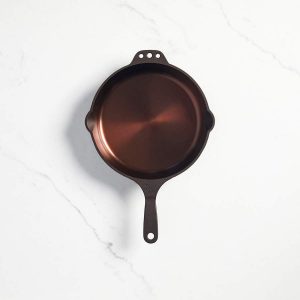 If you want an upgrade on your classic cast iron, this is a brand that has innovated the skillet and elevated it to new heights. It is expensive, so is not necessarily accessible to everyone, but is a much better value than a STAUB or Le Creuset if you don’t mind trying out a new company. The unique polished interior is worth a try if you want the benefits of cast iron cooking without the constant maintenance of a rough cast.

This is kind of like the Cadillac of cast iron skillets. Another new American company, Smithey is manufactured and designed in South Carolina. The founder of the company was inspired by vintage cast iron skillets and restored old skillets before diving into designing his own line.

Yes – if you want an upgrade on your classic cast iron, this is a brand that has innovated the skillet and elevated it to new heights. It is expensive, so is not necessarily accessible to everyone, but is a much better value than a STAUB or Le Creuset if you don’t mind trying out a new company. The unique polished interior is worth a try if you want the benefits of cast iron cooking without the constant maintenance of a rough cast.